One has to wonder if, back in the 1930s when Meade Babcock purchased the land now known as Putney Pond and Woodlands, he could have had any inkling that it would one day become the shinning jewel of Prospect’s parks. He used the property for hunting and fishing until the 1950s, when Betty and Moseley Putney bought the property and moved into the log cabin which stood there. Their son, Moseley Putney, was in military training to be a pilot when his plane crashed and he died. The senior Putneys dedicated the pond to their son and named it Putney’s Pond. Today the 25-acre tract, which was purchased by the city of Prospect in 2008 with the help of a grant from the Kentucky Heritage Land Conservation Fund, stands as a shining example of Prospect’s desire to stay green.

From the woodland trails, which boast the State Champion Kentucky Coffee Tree, to the pond and surrounding wetlands, the park is truly one of Prospect’s treasures. 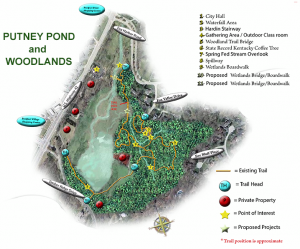